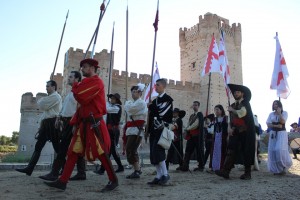 With the arrival of August, one of the most long-awaited events of the year takes place, the Renaissance week. After the excitement and involvement of residents and visitors in the two previous editions, Medina del Campo is ready to recall its glorious period, that is, the 15th and 16th centuries.

This year, continuing with the same working philosophy shared by hundreds of groups, stalls, companies and entities that take part and collaborate on the making of the programme, the Renaissance week widens its horizons to new cultural and tourist proposals.

Worth mentioning is the Imperial and Comunero’s Festival, which will begin on Thursday evening, August 14, and will last for four days, ending on Sunday, August 17. The streets of the village will be full of colour, music, and the wealthy atmosphere that former markets brought to this land.

It is in this special environment where more than 3.000 figureheads, men and women, children, young and elderly people from Medina, from its neighborhoods, hamlets and regions will make the scheduled reenactments and historical activities real. Consequently, this will give life to distinguished characters who walked along the streets and squares of the village.

We are proud of this popular mobilisation and grateful for the mass involvement on the part of the citizenry; this is why the Renaissance week 2014 will provide the opportunity to enjoy our rich history and to host as they deserve the big amount of visitors that will arrive to Medina del Campo. 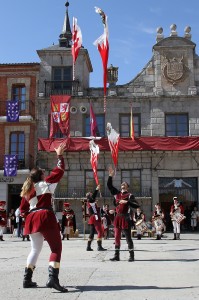 Medina del Campo celebrates one of the most full of life weeks of the year, the Renaissance Week. This festival, which started in 2012 and is part of the Spanish Association and European Confederation of Festivals and Historical Recreations, takes place during the second half of August. This celebration aims at showing local people and visitor the most magnificent period in the history of Medina del Campo, that is, the 15th and 16th centuries.

During the Renaissance Week of Medina del Campo there are numerous cultural, tourist and leisure activities that have been thought for the enjoyment of the whole family, from the youngest members to the oldest ones. The streets of the city will be illuminated and decorated simulating a complete Renaissance atmosphere. However, the city is not the only one prepared to go back to the 15th and 16th centuries, its citizens and visitors are also encouraged to be dressed up as Renaissance characters such as knights or beautiful dames, ordinary working people or professional associations.

Those days it is worth taking part in the parades, for example the parade of knights and horses that ends up in the Castle of la Mota, exhibitions, such as weapons from the Golden age, concerts, workshops in which children and young people can learn the big amount of things that can be done with a brush and their own hands, street theatres, Renaissance dances for children and old people, and historical recreations, among many other activities. Furthermore, for the animal lovers, horse or camel riding, and falconry exhibitions can be seen around the city. There are several scenes in which all those activities are set. The market, different stalls, exhibitions, representations and historical recreations are placed both in the historic part of the city and in some emblematic tourist points such as the Castle of la Mota.

And there are even more things that can be done during this Renaissance Week. Medina del Campo offers a variety of visits with extensive opening hours to the most important tourist resources of the city.

Do not hesitate! Medina del Campo wants to welcome you, it does not matter which part of the world are you from. You will spend the most amazing days you can think of. 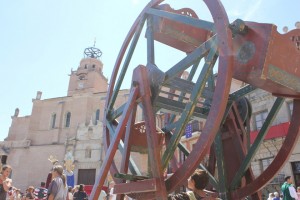 Medina del Campo, in the heart of Castile and Leon and the Rueda Wine Route, has such a rich patrimonial heritage that turns this city into one of the most highly regarded inland tourist areas of Spain. The Castle of la Mota, “Las Salinas” SpaPalace, and the commercial historic centre place this city at a high gastronomic and cultural level.

With the arrival of August, one of the most long-awaited events takes place, the Renaissance Week. After the excitement and involvement of residents and visitors, Medina del Campo is ready to recall its glorious period, the 15th and 16th centuries. With a shared working philosophy, thousands of people take part in the Renaissance Week of Medina del Campo and over 100 activities are organised.

Worth mentioning is the Imperial and Comunero’s Festival. Old markets, placed in the main square of the city (Plaza Mayor de la Hispanidad), fill the streets of the city with a special environment and around 3.000 figureheads will give life to distinguished characters that walked along the city. St. Vicente Ferrer, the Prince Fernando de Antequera, his wife Doña Leonor de Alburquerque, Juan II, the Catholic Kings, their daughter Joanna, Carlos V, the Comunero’s captains, St. John of the Cross or Teresa de Jesus are some of the protagonists. 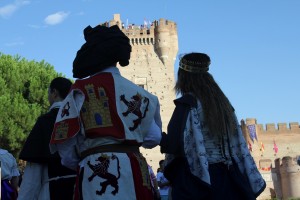 What you cannot miss…

1. A MARKET WITH AROUND 200 STALLS. The market opens its doors from the evening, August 14th to 17th and it is placed at the main square of the city (Plaza Mayor de la Hispanidad) and the Royal Butchers.

2. THE BURNING OF MEDINA. On Saturday evening-night there are plenty of activities such as the Tournament of the Mota or the torch and trade union parades that end up with the Historic Recreation of the Burning of Medina by the troops of Carlos I in 1520.

3. THE IMPRESSIVE CASTLE OF LA MOTA. The palisade of the Castle of la Mota comes to life on August 15th, 16th and 17th as many ludic activities are organised.